Everyone knows that water extinguishes fires, right? But why and how does this common liquid, which is made of hydrogen and oxygen (two things that can further fuel a fire) extinguish fires, rather than making the fire even worse? And can water be used to put out every fire that we encounter or are things more complicated than that?

We will take a closer look at the science of fire and why water can be such an effective extinguishing agent (though not on all types of fires). Here’s what you need to know.

Also read: What Do Firefighters Use to Put Out a Fire?

What Is A Fire?

A fire consists of three components and without them, you can’t have a fire.

You need a fuel (that is whatever is going to be burned), you need oxygen or another oxidizer (which allows for the fuel to react in an exothermic manner we call “burning”) and you need heat.

Thus, whenever we look to extinguish a fire, what we’re really doing is looking to eliminate one of those three components (which are often referred to as the “fire triangle”). If you can eliminate more than one component – fantastic, but it’s not required, you just have to get rid of one to stop a fire.

Also read: What Is The Temperature Of Fire? How Hot Does it Get?

Water vs Fire: The Problem

So, then we turn to water. Humble dihydrogen monoxide or H2O.

This, at first glance, seems to be the least likely chemical on earth to extinguish fires with. After all – it’s made up of hydrogen and oxygen both of which are highly flammable.

Why doesn’t it just break down into its constituent elements and make a fire worse, rather than extinguishing it? Well, there are a couple of things to know.

Firstly, the compounds of elements often have very different properties from the elements themselves. This is why it is true that Mercury (Hg) is poisonous to people, but also the mercury in vaccines is not pure mercury, but rather in compound form and is not poisonous.

Secondly, in order to break a compound down, you have to break the chemical bonds in that compound and water has two sets of bonds. There is a very strong bond between the oxygen and the hydrogen atoms in the water molecule, which requires a lot of heat to break.

But there is also a much weaker set of bonds created between the individual molecules known as “van der Waals” forces. We won’t turn this into a chemistry lecture, but these come about because Oxygen is really good at dragging an electron away from Hydrogen and this leads to the “polarization” of water molecules.

In essence, the Oxygen end of the molecule carries a slight negative charge, and the Hydrogen end a slight positive and these allow for the attraction of other molecules (each bearing the opposite charge).

One of the consequences of these forces is that water is one of the very substances that is smaller in liquid form (where the van der Waals forces pull all the molecules together) than it is in solid form (ice is about 10% bigger in volume than the equivalent amount of water is).

Thus, before you can get around to breaking the bonds inside a water molecule, you also have to break these weaker intermolecular forces and while they aren’t super strong, they do make it much harder to even turn water into a gas (steam) than it would be without them. And thus, they raise the temperature required to break down a water molecule.

Why Does Water Extinguish Fire?

When water extinguishes a fire, it does so because it doesn’t break down into its constituent elements. The water molecule doesn’t become hot enough to separate into hydrogen and oxygen and instead, has two potential actions on the fire that can put it out.

Firstly, it absorbs the heat from the fire. This is the main method by which water extinguishes fire. Room temperature water is about 77 degrees Fahrenheit and water won’t become steam until it hits 212 degrees Fahrenheit (the boiling point of water).

Thus, the water you put on the blaze can absorb quite a lot of heat before it stops being water (and don’t worry steam is just water gas, it’s not a mix of hydrogen and oxygen gases). If all the water you add to a fire turns to steam, you can just add more water, the steam will eventually condense into water again, which is harmless.

The second way it might extinguish a fire is by smothering it. If, for example, you had a fire in a small trash can and you dumped a bucket of water over the fire, half-filling the trash can with water and covering it completely – you would remove the oxygen source from the fire.

This video goes into more detail about the science of fire and water:

This is a great question but no, fire is not “alive” in the sense that we mean “has a biological basis for being and is capable of feeling pain (or other emotions)”.

“Being alive” is a metaphor that we use for fire because it has appetites (fire doesn’t go out until it has consumed all the fuel, it can spread from place-to-place and therefore “breeds”, and so on…) but these aren’t conscious appetites but rather a consequence of the chemistry involved.

So, no, water doesn’t kill the fire, because in the way that we consider things to be “alive”, fire is not really alive.

Are There Circumstances Under Which Water Won’t Put Out Fires?

Yes, and, in fact, there are circumstances under which you definitely shouldn’t use water to put out a fire.

Firstly, water will extinguish an electrical fire (no matter what you’ve heard to the contrary) the trouble is not that it won’t put the fire out, it’s that you may create a deadly problem for yourself, instead.

Water will conduct electricity (though it doesn’t do it in any kind of ordered fashion) and thus as you empty water onto an electrical fire – you might be building an electrical circuit that could electrocute you.

Take a look at what can happen with water on an electrical fire:

So, don’t put out electrical fires with water. Use a class C fire extinguisher, instead. Like this Class ABC extinguisher.

There is also an issue with putting out oil and liquid fires with water.

Again, the water is capable of extinguishing these fires through cooling and even, potentially, cutting off the oxygen, but what is far more likely to happens is that when you add water, you splash the burning liquid around and instead of putting it out – you spread the fire.

This demonstration shows what putting a small amount of water on a grease fire can do:

So, don’t put out liquid or oil fires with water. Use a Class B or a Class K fire extinguisher, instead. The Class ABC extinguisher shown above will work for Class B flammable liquid fires, but for a kitchen oil fire (Class K) use an extinguisher like this.

Finally, we said earlier that if you get enough heat then the water molecule can break down into hydrogen and oxygen and while this is unlikely to happen within the confines of your home or office – metal fires (involving metals such as Potassium, Sodium, Magnesium, etc.) can burn hot enough to split the water molecule into constituent atoms.

This makes for a very explosive combination, indeed, as the hydrogen gas produced will ignite violently in the presence of oxygen.

Check out what happens when water is put on a flammable metal (in this case magnesium):

So, whatever you do, don’t put out metal fires with water. Use a class D fire extinguisher, like this one, instead.

Here is some more good information about this: What Type Of Fire Can Be Put Out Safely With Water? and How Do You Put Out A Magnesium Fire?

As we’ve seen, water puts out fires either by removing the heat source and/or by removing the oxygen from the fire, which are two of the three elements of the fire triangle. However, we just need to stress again that water can’t put out all fires.

While ordinary fires of solid material are often easily extinguished with water, electrical fires, oil or liquid fires, and metal fires should never be tackled with water. You are at a high risk of harming yourself, property, and others if you do so. If you aren’t confident about how to put out a fire, don’t tackle it, call the fire department instead, that’s what they’re there for.

Can You Put Out a Fire with Seawater? Does it Work?

Does 911 Cost Money? The Price of Emergency Calls

Is Urine/Pee Flammable? Can It Start a Fire? 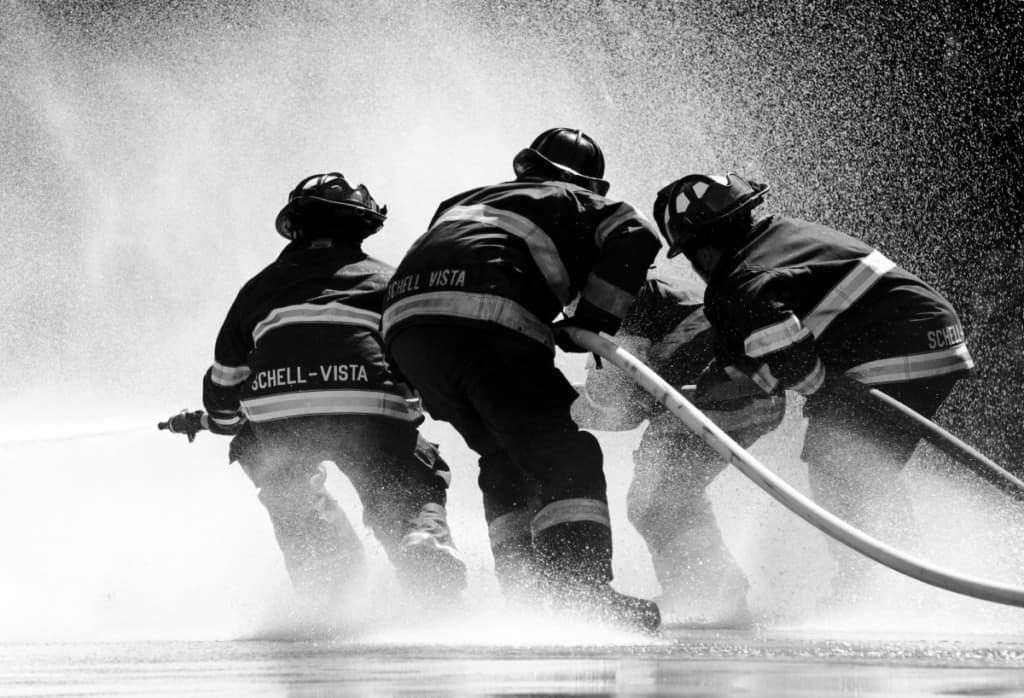