How many firefighters does it really take to put out the fire? Does it depend on what kind of fire it is? You may have seen a building on fire in your neighborhood or on the news and seen dozens of fire engines working to put out the fire. Why do they need so many?

On average, approximately 10 to 20 total firefighters are required to safely fight a fire. This number can vary depending on the type and size of the building, the number of people threatened, and what stage the fire is in when they arrive.

It is hard to give an exact number to a question like this, because a fire is such a dynamic event. Below we will dig a bit deeper into the different factors that effect the number of firefighters that are needed.

How Many Firefighters Does it Really Take?

The fire service is known for making do with the resources they have. There is a big difference between the ideal number of firefighters and being realistic about the resources that are needed to safely do the job.

The number needed is heavily dependent upon what is actually on fire and how many people are threatened. We will focus mostly on the single-family house fire, as that is one of the most common types.

If all the firefighters showed up to a fire a just started doing whatever they think should be done, without communicating or organizing their efforts towards the task at hand, do you think everyone would be saved and the fire extinguished as safely and efficiently as possible? No, it certainly would not. Firefighting crews must have a coordinated effort.

The fire service uses a system called ICS (Incident Command System). This structure is used on all multi-unit incidents and governs much of what, how and when certain tasks are completed at a fire. Most tasks must be completed as a group of at least two, for firefighter safety.

That makes 10, which is the bare minimum for any “working fire”, but there are quite a few other tasks that may need to be done (shutting off electricity and gas, connecting to a fire hydrant, specialty firefighter rescue team called RIC, breaking down doors or windows, and a ton of others) and many of the listed tasks can require many more personnel.

FACT: “Working Fire” is a term used for any fire that is determined to be involved enough to cause significant damage and have a need for multiple crews in order to contain.

If the fire is determined to be bigger, more involved, more victims needing rescue or other complications, the chief will order a 2nd, 3rd, 4th, etc. alarm. Each additional alarm assignment will send 10-13 more firefighters.

For more information on the different types of apparatus and why they sometimes carry different numbers of firefighters. Read this article.

So you can see why the number of firefighters needed to fight a fire is hard to answer without more information.

How Many Firefighters Ride on a Fire Truck?

There is no one answer to how many firefighters ride on a fire truck. The number of firefighters on a single truck or engine can be anywhere from 2 to 8! And there are probably even examples that outside that range. But the average these days seems to be 3-4 firefighters per vehicle.

50 years ago, many fire vehicles carried 6-8 firefighters each. But as changes in construction, fire codes and fire prevention efforts have improved; fires have become less common than in the past. This along with the tightened city, state and federal budgets over the last 20 years, has caused the average staffing per apparatus to be brought down to 3-4 and in some cases even 2.

There are experts in the fire service who say that 4 firefighters per apparatus should be the absolute minimum. They say that when there are less than 4, the tasks that need to be accomplished by the first arriving engine, take significantly longer, which can effect the end result.

“In my experience, it’s virtually impossible to do a proper fire suppression without at least four people on the first arriving vehicle.”

So, while it’s probably no longer the best practice to have 6-8 firefighters per engine, less than 4 may not be in everyone’s best interest. An article (For Firefighting Crews, Size Matters) on Insidescience.org talks more about this study done by NIST (National Institute of Standards and Technology), scientifically testing the effect of crew size.

In my department, until recently we had 3 firefighters on each engine and truck. Only in the last 2 years have we added a fourth to the trucks, but the engines still all have 3 personnel. I know there have been talks about trying to add a fourth to the engines too, as it adds a lot to the capabilities of the first arriving rig, but I’m not sure if it will ever happen.

How Many Firefighters Are in One Station?

Again, it can really depend on how many pieces of apparatus are stationed at each house and how each of those rigs are staffed.

In my department, most of the stations have one engine, with three firefighters on-duty at a time. The truck and HazMat (Hazardous Materials) stations will have 4-6 personnel, on 1-2 different rigs. This seems to be the norm in my area, as many of the other departments near me are staffed similarly.

So, in my area, the average number of firefighters in one station is 3-6.

Wildland fires are a different beast entirely. Unless it’s a smaller brush fire that is well contained by natural barriers, the 10 firefighters we talked about above are nowhere near enough to handle the incident!

Wildland fires can burn 100,000’s of acres, last months at a time, and require thousands of firefighters from all over in order to contain and extinguish!

They usually need whole divisions of personnel to manage not just all the firefighting resources, but entire groups of people working on command, communication, planning, food, medical, facilities and a variety of others. As the incident gets bigger, the number of people needed to manage every aspect grows rapidly.

As an example of the extreme, starting on December 4th, 2018, the Thomas Fire began in Southern California. It is one of the most destructive wildfires in California history. It burned 218,893 acres or 440 square miles! At one point, there were over 8500 firefighters working to fight it. For information and statistics on this fire see this Wikipedia page.

How Many Firefighters Are There in the U.S.?

What Is the Largest Fire Department in the U.S.?

Firefighter Air Tanks and Why They Don’t Explode

What Is a Firefighter Endorsement? 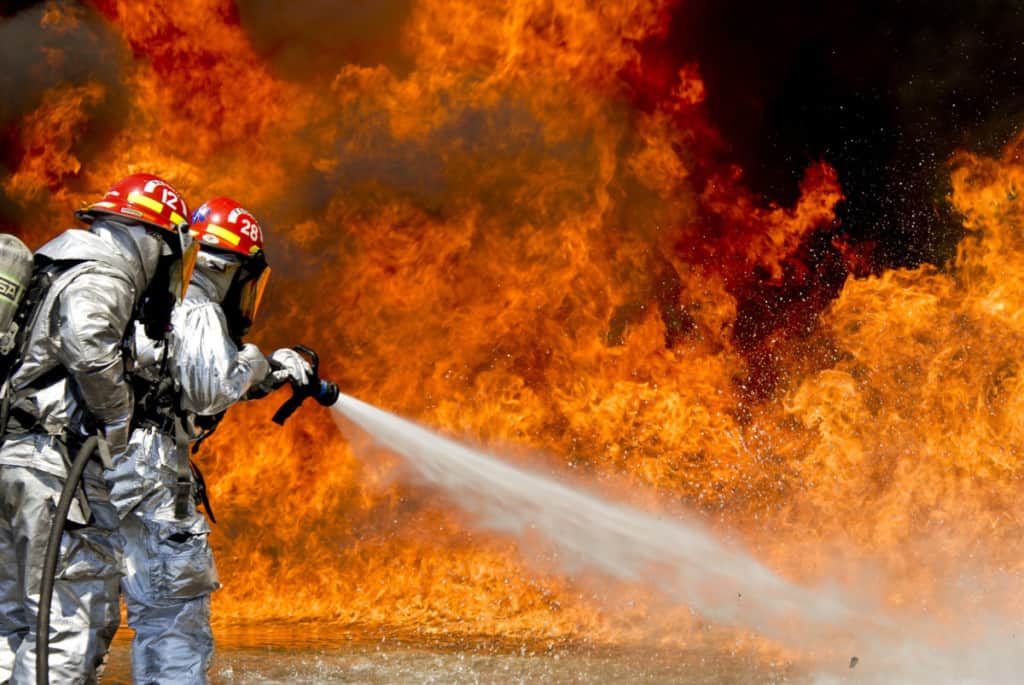